THE BATTLE THAT ATE THE FILM...

How a single chapter devoured the screentime of a three-hour movie, as revealed with the aid of a remote pause button, a notebook, a calculator, and a trial version of Graph FX. (These figures have a plus/minus factor of less than one percent: there is about 1/2 minute unaccounted for in my calculations, but the breakdowns and totals were done several times for accuracy before graphing.)


Diagram 1.
Story elements broken down by percentage of screen time 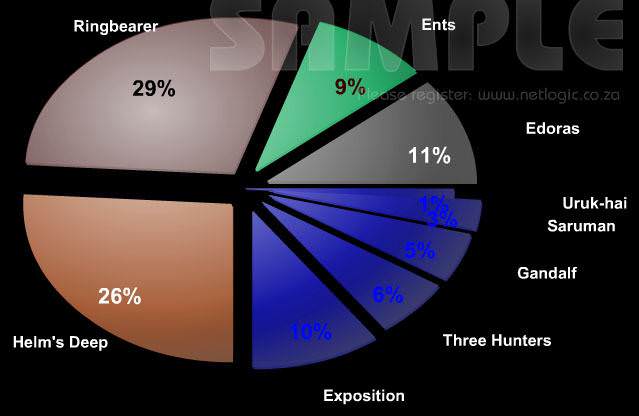 From this it can be clearly seen at a glance that this single battle scene  and only a preliminary skirmish in the Ring War, subordinate in the plot of the epic to many other factors  is rated by J/B/W as on a par with the Ringbearer's ordeal, and more important than most of the other elements put together. 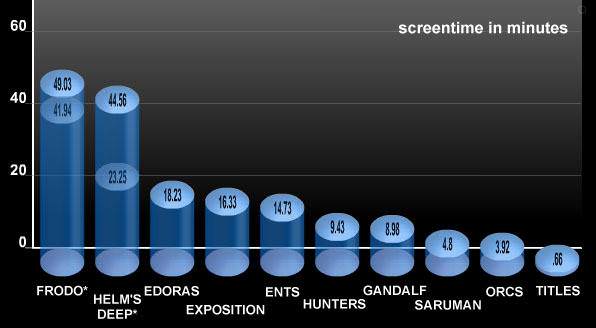 *Frodo: the lower number (ca. 42 min.) reflects the scenes which are book-based, the higher number (ca. 49 min.) is including the invented Osgiliath/Ringwraith scenes.


From the comparison of these figures, it is obvious what value J/B/W place on plot logic, character development, and pacing, vis a vis fight scenes. The figures are misleading, however, due to the fact that for instance, half of Gandalf's scenes from "The White Rider" segment are simply rerun from the preface footage  as well as the fact that for all other characters than Sam and Gollum, there is no resemblance between the movie people and their purported inspiration. Poor Uglúk is given as much speaking time as is devoted to the New Line logo and main title lettering; but it is just as bad that his character is inverted, so that a brutal-but-intelligent, and very loyal, minion is turned into a mindless thug, and the chilling fact that endocannibalism is still taboo among Orcs turned into its reverse, and employed for low comedy. The Ents get a great deal of screen time, the fourth most  but since the Treebeard of the books  a wise, well-informed leader of an isolated people who has been considering the problems of world politics for a long time, and is only catalyzed into following his instincts by the arrival of Merry and Pippin, to use them quite politically (if with their own will) for the purpose of inciting his own people to active combat when he knows that they will take casualties and quite possibly los  is transformed into a senile old dodderer ("mice" anyone? or "south"?) whose actions are exactly the opposite (as are the other Ents') from those of the original  one cannot exactly consider this a plus.

More could be done, by those with world enough and time, breaking the proportions down by Western Front vs Eastern Front, by comparing the amount relative to the originating chapters, or the fact that of twenty-one chapters in TTT, only 12 were even attempted  and some of us, at least, with better memories and the willingness to research, can point to the fact that when this was revealed, J/B/W claimed that this was to improve pacing, because there was not enough material in the book ROTK to fill a three-hour movie! Now we learn that much of ROTK itself has been cut, sacrificed to zombie battles and mûmak-surfing, and this earlier statement excusing the ommision of the judging of Saruman from TTT-M with a promised deferment to ROTK-M, made in interview to many witnesses at a book signing in February 2002, has been conveniently forgotten.

Nevertheless, this little bit of graphic display serves to demonstrate that it was not pacing alone, nor the requirements of the dramatic form, which necessitated the cuts: rather, it was the priorities of the filmmakers, and their choice to shortchange all other aspects of the story in the interest of creating a spectacularly-violent but simple-minded hack'em'up, rather than an epic.

*(That which primarily distinguishes an epic from other war stories is its sense of the Eternal, that something more is at play than mere violence and contention between earthly rivals, and an elegiac tone, rather than one of crass comedy and/or mindless brutality.)
Back to TOC