Visual Footnotes for "Promises Kept"
(the following stills come from the archive of New Line publicity shots at www.warofthering.net)

NOT EVEN MIRACLE MAX COULD HELP HIM 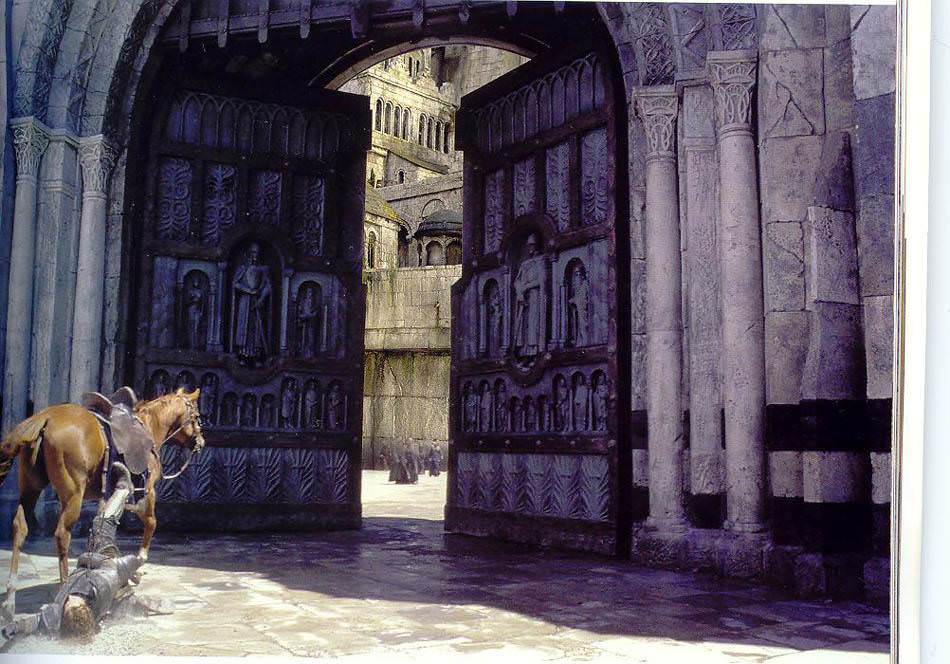 Arrows to the body and a dragging -- obviously he's Superman, to survive that! That doesn't look much like a warhorse capable of or bred for carrying men in full armour, does it? A palfrey, not a destrier, nor even a sturdy hunting cob. And where's his barding? (Then again the armour doesn't seem very sturdy, either given the ease with which it was pierced.) And I've seen more impressive doors on a church...Oh, more Generic Celtic/Medieval Mishmash serving as Ye Olde Style, I see. Nor much of a great square on the other side.
(Here is a link to a very good picture of Chartes Cathedral for comparison. Google is a fine service.) http://home.teleport.com/~smithder/Chartres%20Cathedral%20South%20Porch%20Doors.jpg
DON'T YOU KNOW THERE'S A WAR ON? 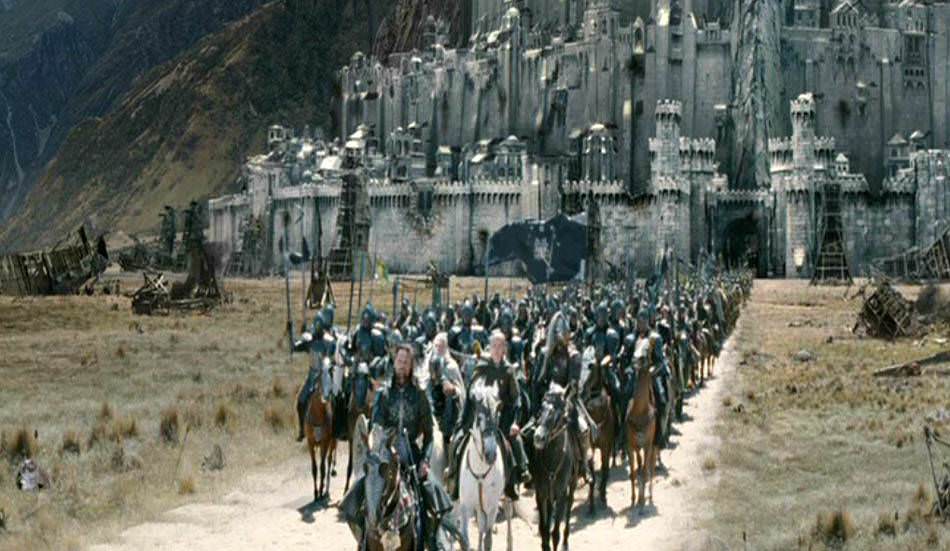 Two frames, moments apart, of the same scene, one slightly compressed. (Eventually I will do my own version of what this scene should look like.)

Film apologists who try to argue for the "realism" of the catapult scenes by claiming that all that gets smashed is ornamental stonework not defensive structures (a fairly common claim)  take note: that's definitely major structural damage to the curtain wall up there on the left side of the gates, looking as singed as if it were hit with a missile. Those are holes, clear through the outer Circle -- the wall that according to the books, could not be brought down or damaged by anything less than a major earthquake. Of course, that wall as built is about as defensive a structure as Neuschwanstein... (Sugar cubes: the lost building material of the Numenoreans...)

I also find it interesting that, quite independently, Fondstad and I came up with the same projections for the perimeter of Minas Tirith. In her Atlas of Middle Earth, she estimates a diameter of 3100 feet for the First Circle of the City; by looking at ancient cities, considering my personal memories of visits to Europe, and by drawing up a plan based on the given vertical dimensions in the text, and how wide each Circle would have to be to have multiple streets as in ROTK, not one single one as shown in the film, I came up with a range of 3000 to 4000 feet myself. The more conservative estimate is still three times the diameter of the little castle-town shown above...


HARDLY THE HAMMER OF A GOD 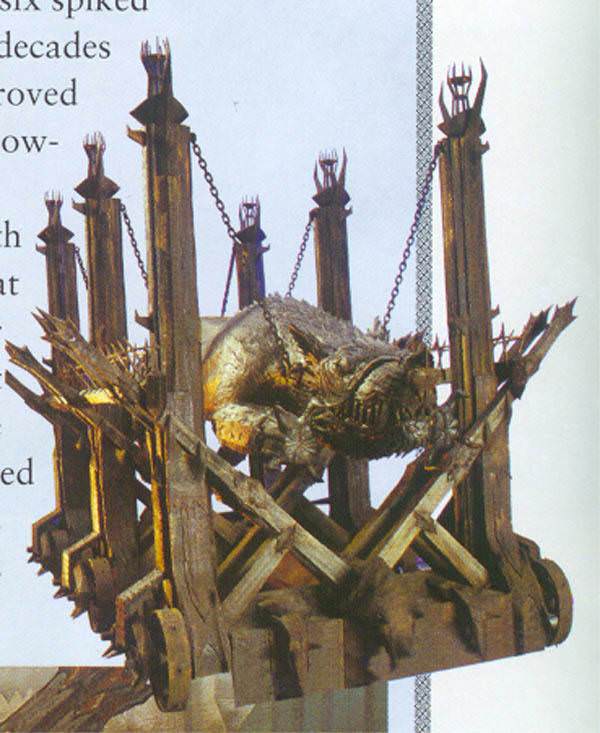 The spiky neo-gothic bits on the ends of the beams are certainly decorative, but hardly an adequate substitute for defensive cladding and/or artillery mounts.
NOT FIT FOR A STEWARD, LET ALONE A KING 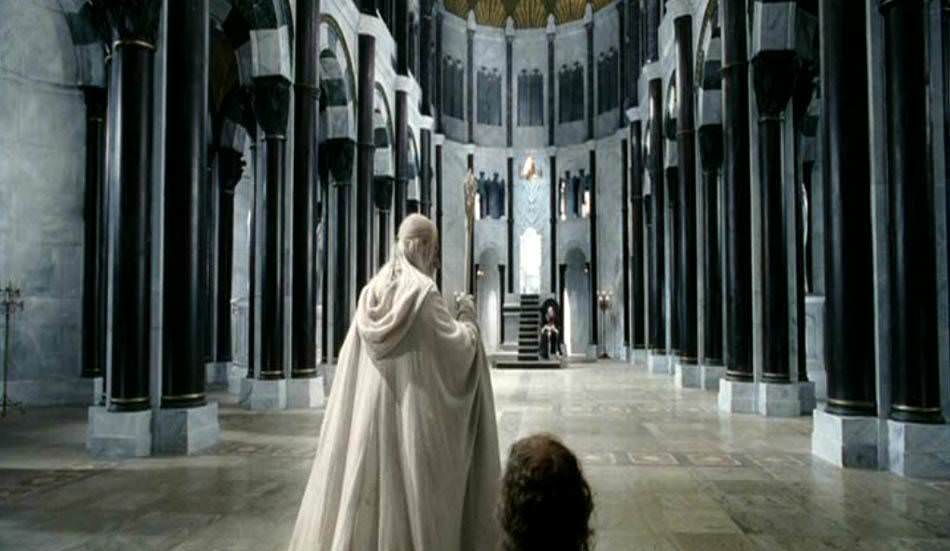 The Steward's Hall here is shown as being no wider than Meduseld -- and it looks like they simply ripped off one of the smaller-sized basilicas in Rome for inspiration, right down to making the throne an absurd "high altar" -- that's got to be the stupidest throne design I've ever seen, bar none. Is there no one there who has any idea of what the word "dais" means?  Is that their idea of a marble canopy, and haven't they ever seen the ones over tombs and altars in say, Westminster or Prague? The pillars are black, okay, but they look like bakelite not marble, and where are the carven capitals, floriated, inhabited and gilded? And where is the magnificent Elven-style mosaic of stones depicting the sacred Tree, hey? Is that pallid bit of writhing marble behind the altar supposed to be it? This is crude -- there are more magnificent visuals in the Myst games! I tell ya, Lucas at least got the sets right in Phantom Menace and Attack of the Clones, if little else, which puts him signally ahead of Jackson. (Yeah, I'll do this one up too, someday.)

For comparison, the basilica of Roman Trier:
http://www.thais.it/architettura/Romana/Alte/Foto_0308.htm
Shouldn't the heirs of Atlantis manage better than a provincial capitol? Isn't fantasy supposed to be grander and more free of restrictions than the mundane world? That hall, shown above, isn't wide enough to require columns.

Now, don't get me wrong -- if these were backdrops for a local theatrical company's production, they'd be perfectly admirable. But more is required of an epic movie, than of a hometown stage set. Even more saddening is the fact that this set was conceived much more magnificently in the sketches shown in the Art of ROTK book -- but I guess it was more important to spend the money doing Zombies and other monsters...

Okay, so that's being a little too realistic. (Even with the troll.) So we'll allow for the sake of argument, a magically-reinforced catapult that can somehow hold up that weight without the wooden arm or the cables breaking, and see what might happen:

That wedge at the base of the wall is a talus, btw, a widening of the foundation into a ramp of smooth blocks, which makes it even harder to break through or scale. Krak des Chevaliers, which was never taken in battle, has one.

So what if we use a smaller projectile, which should fly farther and not require such suspension of disbelief, either?

Actually the wall would be even higher and thicker than the drawing, given that there were real ancient city walls fifty feet high and ten to fifteen feet thick; Numenoreans could surely manage at least that, I'd bet.

How about if we do what they did in the book, instead? Here is a very crudely and inaccurately drawn trebuchet giving a rough idea of what happens when physics is on your side:

In other words -- INCOMING!

If you want to see real ancient artillery in action, go here:
http://members.iinet.net.au/~rmine/middel.html

Back to Promises Kept