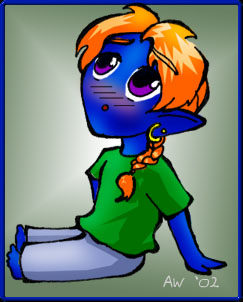 I am 25 years old and I'm now back in school for graphic design, so don't expect a lot of updates. Sorry. :( I took animation for two years in college but found out it wasn't for me. My current hobbies are webdesign, msting, reading, drawing, digitally painting my drawings, and working on my fantasy comic, Crypt (which is also on pause right now).

I'm really into anime right now, and I'm building, not only my anime library, but also my manga collection. Want to talk about animes (the ones that I know stuff about...) IM me!
(Anime List: Ranma 1/2, Inuyasha, .hack//, Dragon Half, DNAngel, Cardcaptor Sakura, Naruto, Legend of Zelda, Bleach, Hikaru No Go, Saiyuki, Get Backers, Full Metal Panic, Tsubasa, xxxHolic, Escaflowne, Final Fantasy (to a point), Fruits Basket, Haibane Renmei, (and more if I think of them)

I'm 27 years old and I have a wonderful husband, and two beautiful daughters. I have a degree in teaching English as a Second Language, as well as a minor each in English Literature and Psychology.  I'm thinking about a Masters in Psychology, but at the moment, I'm a full-time Mom, and that's enough for me.

I hope you enjoy our MSTs, and please, feel free to browse around the rest of AW's site. And enjoy your stay.